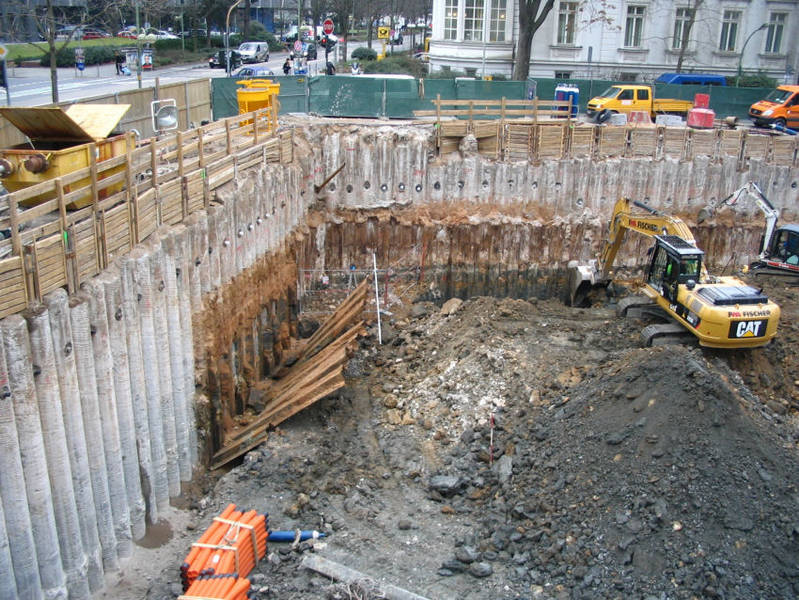 The engineers have secured the excavation against the Straße Niedenau und Bockenheimer Landstraße with an overcut and simply anchored bored pile wall.

The program RTwalls helps us to produce a technically realizable and at the same time efficient solution for our client.

Technically feasible and still as efficient as possible: the demands of structural planners are ever increasing in the current climate. Dr. Hug Geoconsult from Oberursel, responsible for the foundation engineering tasks for the Frankfurt WESTEND WINDOWS, relies on IT systems that are proven in the construction industry.

The new WESTEND WINDOWS development in Frankfurt am Main on the Bockenheimer Landstraße 33 site was already largely occupied. The client, Projektgesellschaft Bockenheimer Landstraße 33-35 GmbH & Co. KG, represented by FGI Frankfurter Gewerbeimmobilien GmbH and IMBW Capital & Consulting GmbH, Stuttgart, commissioned construction of the new commercial property with 7 + 1 stories in downtown Frankfurt. The start of works: November 2006. The comprehensive planning measures already started earlier: In May 2006, Dr. Hug Geoconsult from Oberursel and their project partners, the architects from the office of Jo. Franzke in Frankfurt and the structural planners from Ruffert & Partner from Limburg, mid-Hesse were required to prepare everything required for successful implementation under the supervision of the project management office, WPV Baubetreuung GmbH, Frankfurt.

Before the new building could be erected, a 13-story building at Bockenheimer Landstraße 33 and a 5-story residential building at Straße Niedenau 65 had to be torn down. The demolition works, excavation shoring and resulting comprehensive approval processes involving all partners were a particular challenge for the Oberursel engineers.

“It was our task to dismantle the multi-story structure with basement,” says foundation specialist Rainer Massat of Dr. Hug. “Additionally, there was the direct proximity to the Bockenheimer Landstraße, which with the main Telekom line in the sidewalk area and various drains in the street and the subway train lines that run there, set particularly complex limiting conditions,” he continues. After all, it was here that the engineers had to plan a 1,650 square meter, nine meter deep excavation.

Thus, the engineers shored up the excavation against the Straße Niedenau und Bockenheimer Landstraße with an overcut and simply anchored bored pile wall. For the areas directly neighboring other buildings, HDI underpinning elements were used, also partially simply anchored.

“The foundation works themselves were anything but easy. But we also had to invest the same amount of time in the communication process,” the specialist engineer acknowledges. Because after the subsoil investigation, the office first had to create a geo-technical assessment. After this came the documents for building application approval, while approval for the statics of the excavation shoring had to be obtained. A number of environmental questions had to be explained before the calculations made by the engineers from Oberursel could be performed in the construction site. The goal of Hug Geoconsult: economic dimensioning of the shoring near the Bockenheimer Landstraße. The engineers at Dr. Hug Geoconsult look back on positive experiences with the RIB dimensioning and calculation software.

“In addition, our client always expects both a technically feasible and an economic plan,” says Rainer Massat. According to the engineer, such a calculation presupposes the optimum calculation, because only this can result in a correspondingly favorable design later. Economic dimensioning of the shoring near the Bockenheimer Landstraße with the complex underground pipe system beneath the earth meant the task was not at all easy. In addition, there was the soil condition – only a few meters of the upper soil consist of of backfills and quaternary gravel. Below this are tertiary clays, typical for Frankfurt am Main. “To optimize the bonding length of the shoring, our team had to try out various alternative anchorings and compare them,” adds foundation engineering specialist Melanie Löcker. Various questions, for example, whether one or two anchoring positions were advantageous, what was the ideal anchor inclination and other parameter alternatives were compared at Dr. Hug Geoconsult internally, with the goal of presenting the client later with an optimized shoring – above all, from the economic perspective.

“The program RTwalls helps us to produce a technically realizable and at the same time efficient solution for our client,” the two specialist engineers say. Because the necessary alternative studies are relatively easy to create with the software. In this way, system sizes can be altered with only a few mouse clicks and new construction states created. The fact that the entered excavation sections are immediately graphically visible also makes the work pleasant for the engineers

EASY TASK THANKS TO PINWALL

Rainer Massat, former civil engineer at Ed. Züblin AG, has known the RIBTEC programs for foundation construction for many years. This also includes the software system PINWALL, which makes the complex task of calculating underpinnings easier for the team at Hug Geoconsult. After all, in this field of applications too, only an ideal combination of verifiably and practically realizable solutions is the key to optimum customer satisfaction. “Geometric entry is very easy to do in PINWALL,” Massat adds. “Points can be clicked on with the mouse and moved around very easily over the graphical interactive interface.”

“The engineers at Dr. Hug Geoconsult look back on positive experiences with the Stuttgart technology company’s dimensioning and calculation software. Test engineers, according to the Oberursel company, have no issues with measures calculated using RIBTEC programs.

“The programs are very complex and not all functionalities of the systems are needed in practice for every task,” Massat concludes. “At first glance, getting used to it is rather complex. But especially for tricky tasks in foundation engineering, the versatility of the software solutions offers us the comprehensive support we need.”

Alongside diverse programs from the RIBTEC portfolio, the Hesse-based engineering office also relies on the AVA and project controlling system ARRIBA Planen by RIB. Because Massat and his colleagues value working with solutions that are the standard among leading construction companies in Germany.

Note: The structural engineers from Ruffert & Partner involved in the project also used the software solutions from RIB for the dimensioning of the rising structural parts.