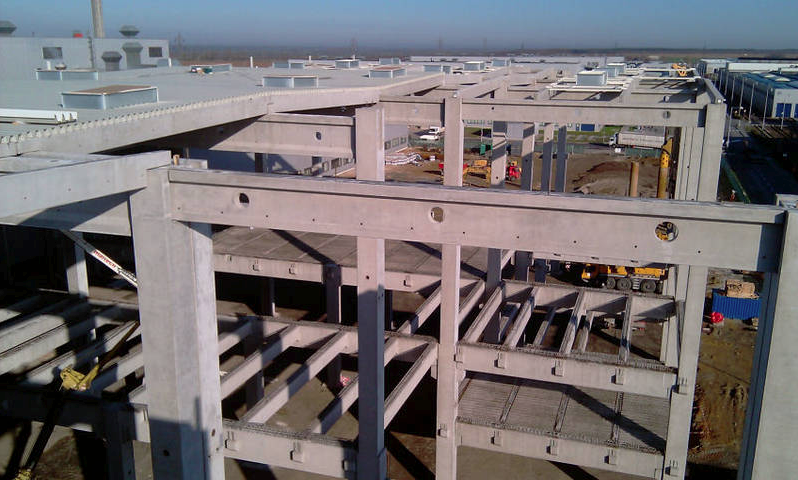 In April 2009, the Volkswagen AG group took the decision to extend production at its location in Bratislava, Slovakia. Already in 2011, the first vehicles of a new series are to leave the production line for delivery across the world. The entire volume of investment is 308 m Euro. Here, with a yearly production capacity of 400,000 vehicles, 1,500 new jobs will also be created.

This extension included an extension to production hall 2A, where painting work takes place. Construction planning and project management were undertaken on the part of the client through an own department within Volkswagen AG construction planning, i.e. according to group-wide standards and regulations. From tendering to award, actual execution to acceptance, all project tasks were carried out bilingually, in Slovakian and German. The tendering documents and project documentation regarding approval for the construction in hall 2A were provided in August 2009 by the Slovakian general planner Coproject a.s. Here, all bills of quantities were created in two languages with support from the project and cost management software by RIB.

SKELETON CONSTRUCTION IN IN-SITU CONCRETE IN THE FIRST PLANNING STAGE

The engineering office BF partners s.r.o., Bratislava, Slovakia, conceived the load-bearing structure of the hall as a skeleton structure in in-situ concrete with facade blocks in a grid of 6.0 m. This allowed, in the first place, a uniform tendering process for the construction services required to take place through a public and fully accessible call for tender. The ceiling structure was formed from continuous supports on hinged rib supports and ceiling panels.  The load-bearing roof structure was designed as a steel structure of trusses and steel purlins, completed with corrugated sheeting and further elements of classical roof construction.

Both for reasons of fire protection and to limit mutual interaction, to ensure robustness and not least to smooth the process of construction, the production hall was divided into three independent construction sections with suitable support doubling at the crossover axes. As foundations for the supports, the engineers went for point foundations, where necessary with local subsoil improvement or soil replacement at the locations of any discontinuities and faults.

The tight schedule started with project preparation, construction approval, tendering and foundation engineering during summer and autumn 2009 and planned for a rapid progression to construction in the winter months and early 2010. Parallel to the actual execution of construction, the implementation planning, including drawing up the detailed construction documentation, and other extensive client requirements, had to be fulfilled. This also included disruption-free production processes in the factory, while adhering to correspondingly high safety standards. .

The Czech company HSF system a.s. received the commission as general contractor for the creation of the production hall. For time reasons – construction had to take place while complying with the strict contractual requirements and schedule – the decision was taken to pre-fabricate the entire load-bearing structure. For this task, the GC selected the Slovakian pre-fabricated parts manufacturer Prefa Sůčany a.s. Implementation planning was taken on by the Slovakian engineering office DeBondt s.r.o., Trencin. An important role in the overall process of planning was played by the fact that a complete re-engineering of the originally planned skeleton structure to an assembled pre-fabricated construction method had to be carried out  by the pre-fabricated parts manufacturer as part of its overall services. In the new planning alternative, transport of the pre-fabricated components was made by road and the assembly on site by heavy truck-mounted cranes. 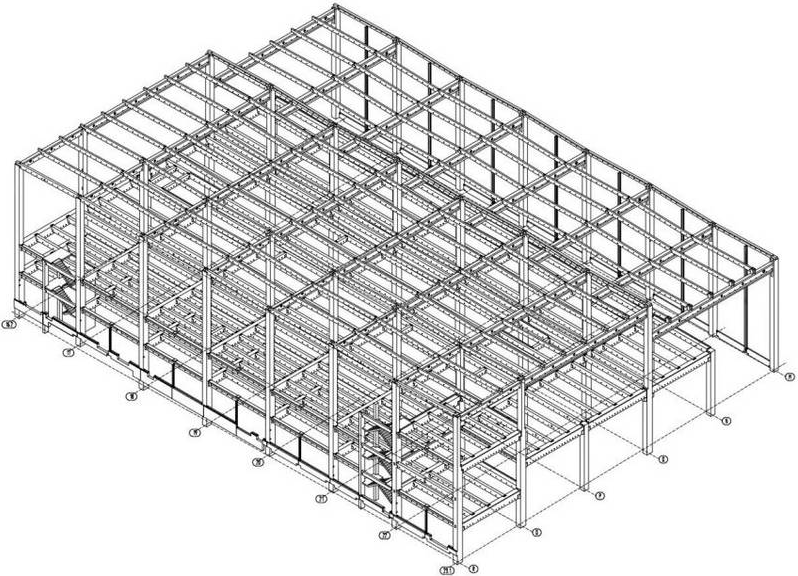 Spatial model of the pre-fabricated parts constructions in the third construction section. 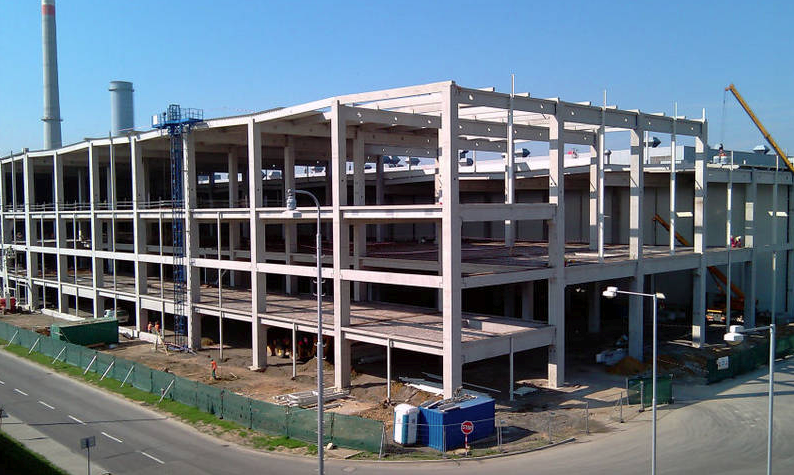 The characteristic point loads on the floors achieved values of up to 407.0 kN, but were around 100.0 kN to 200.0 kN on average. The suspended loads on the 12 m long trusses were between 76.0 kN and 87.0 kN. it was not possible to find a structurally viable and at the same time economical solution for the 24 m long prestressed binder with limited overall height. For these reasons, further project alterations for structural optimization were required. A further hurdle was the given temperature difference between inside and out of around ±30.0 K. The environmental conditions of the exposure classes XC1 and XC2 as well as fire protection requirements R60 had no influence, however, in the static design of the structure.

The engineers of the DeBondt office started in December 2009 with the execution planning and the associated re-engineering of the entire structure. This planning work thus ran parallel to the already started construction and extended from January 2010 to the acceptance in June 2010. The planners who had designed the original skeleton construction in in-situ concrete were also commissioned by the client with the test statics, although these are not according to Slovak standards mandatory mandatory. The foundation works as well as the foundation foundations on large piles and the base plate of the level ± 0.00 m were done by another supplier of the general contractor.

The basic dimensions of the object and its division into three sections as per the original plans were maintained. The originally planned steel structure for the roof was replaced in the reworked planning with pre-stressed and pre-cast concrete. The floor slabs were designed as a combination of in-situ concrete and filigree slabs stored on a grate made of precast beams.

The main vertical load-bearing sections are precast columns with a total height of 24.0 m and a rectangular cross section of 1000/800 mm and 800/800 mm respectively. The supports are clamped in in-situ concrete quiver. An exception is the connection axis to the existing hall 2. Here, the columns are borne on a coupling anchor of type PFEIFER PSF 30.

The biggest challenge of the project was the statics calculation and economic assessment of the supports, as the only present elevator shaft (6 m x 4 m) is not suitable as a stiffening core. The supports must thus ensure a horizontal stability of the structure. Thus, on every floor level, a continuous pre-cast beam with a rectangular or reverse L-cross section was implemented as a comprehensive bracing measure. The optimum static solution was found using the program BEST by RIB. The engineers determined this using the second order analysis taking into account the necessary imperfections and the effective stiffnesses of a variably reinforced cross-section with potential crack formation on the side under tension. In this way, they were able to achieve economic dimensioning while ensuring the adequate buckling safety of all columns.

The engineers were able to demonstrate support loads from the perimeter assembly, from ceiling beams and trusses with the RIB RTool software. The result was short consoles using elastomer supports and high-strength in-situ concrete mortars.

The pre-stressed, 24.0 meter long pre-cast trusses were found to be the most efficient solution for the given height restriction and the fire protection requirements. The complex statics design of the pre-cast trusses, incl. influences such as transport systems, technical recesses in the transverse direction and non-linear tilt protection, was carried out with the software RIB RTfermo.

The load-bearing structure of the interior floors in the technical area was formed of a girder grid of 1,500 mm high main beams (12.0 m x 12.0 m) and notched, 950 mm high joists and rib beams of 3 m each. The actual roof was a composite structure of 60 mm thick pre-cast panels and 140 mm in-situ concrete. The concreting was carried out in large sections, where the largest single operation was 36.0 m x 36.0 m. Here, the process was carried out in such a way that, along the bearings of the rib beams against the joists, a 1 m wide expansion joint was left, creating two construction joints. Here, the upper reinforcements were laid in such a way that they were not loaded at the same time from both sections. Finally, the strips left out were filled.

During the entire construction process, precise execution of connections and details was required. Important here were, for example, the formation and compound effect of the stiffening  beams. These, together with the ceiling plates, function as a continuous beam. Through static calculation and dimensioning  of the main beams and joists in the program RTbalken by RIB, the engineers were able to keep to the tightly limited deflections required by the installed technology. In the same way, with the stiffening  beams, they took account of the torsional loads occurring there in measuring the system.

THE PRE-FABRICATED PARTS ARE MADE OF THE FOLLOWING MATERIALS:

COMPLETION AND EVALUATION OF THE EXECUTED STRUCTURE

The prefabricated part manufacturer Prefa Sucany and the planning office DeBondt have succeeded in fulfilling all restrictive contractual and climatic requirements for the entire building, despite the tight deadlines and the necessary reorganization.  Despite the harsh winter of 2009/2010, the construction works was both on schedule and in the agreed good quality.  The media reported many times on the successful erection of the structure near the Slovakian capital, Bratislava. The decision to construct the factory as much as possible in pre-fabricated components turned out to be the correct one. Looking back on the winter construction process and the high technically required ceiling loads, the choice of pre-fabrication, accompanied by the efficient, reliably statics design and dimensioning , was the only thing that allowed the contractor to comply with and strictly uphold the financial framework at all.

Another bold move from the engineers at DeBondt was to offer the manufacturer of the pre-fabricated components a contractual guarantee on the steel and concrete quantities they had determined together for the quotation submission. Their financial interest in potential savings created an extra incentive to optimize the existing engineering solution. As can be derived from evaluation tables 1 and 2, they were able to save approx. 350 t, i.e. almost 20 % of the structural steel included in the planned quantities in pre-planning thanks to their own specialist expertise, experience and not least the use of powerful software systems from RIB.